Best HOT Product 2019 by Religious Product News.
Every December RPN gives you a roundup of the hottest products and services that came across their desk from manufacturers and dealers in the church market.  This is the “wish list” going into the new year.  Thanks RPN.

List of trade shows we will be exhibiting at.  Drop by and see us.
Creating FUN since 1999

Drop by and see us:

We have been creating fun since 1999

Join our newsletter and receive up to date information on our
new products, trade shows and more.

Come see our new product announcement and
also My Town 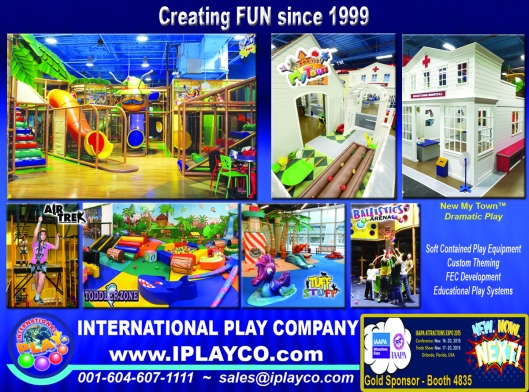 The mall unveiled its new farm-themed play land, and mall leaders say the two-story structure has been a hit with children since it opened over the weekend.

“They’re enjoying it. The parents have as much fun, in a way, with it as the children because they’re able to watch them run around, and it’s very safe. It’s enclosed. They have a lot of fun,” Linduski said.

Marshfield Clinic donated some of the money need to build the new play area.

Are you going to the IHRSA trade show in Las Vegas this month?

Drop by booth #135 and see International Play Company.
Is your club family friendly? Attract families to your fitness or recreation center.

Are you planning to attend the Amusement Expo show in Las Vegas?

Drop by our booth #204 and see Dave.
Get a copy of the new updated Play Solutions Brochure.